As the name of this website implies, we are dedicated to helping low-income Americans find cheaper alternatives to expensive internet service. However, the companies that offer those internet plans do NOT offer inexpensive cable TV plans.

That’s a pity, because millions of Americans can no longer afford even the most basic cable plans offered by America’s cable TV companies. But don’t give up hope, because there is a pretty simple way to get TV service without getting cable.

The official CheapInternet.com tech guru checked in this week with an update on his plan to “cut the cord.” In plain English, that means getting rid of the expensive cable TV plan that’s been eating away at his disposable income.

His alternative is cheap and easy. Here’s exactly what our tech guru said:

We “cut the cord” this week, cancelling our DirecTV service. We were paying $190/month, which admittedly is more than most probably do. We had 3 receivers, local channels service and the ability to get both east/west coast stations.

We could have removed one receiver and the local and east/west and maybe paid about $160/month. But now that we’ve cut the cord we’re only paying $56/month. $6 of that is CBS Now just so we could get Survivor quickly. We’ll probably cancel it later. We also subscribe to Hulu, HBO NOW and Showtime. We also get lots of free shows of on Amazon Prime, which we already pay for just for product shipping benefits.

I love it. The only thing I really miss is turning on CNBC in the AM, but I can watch Bloomberg on Roku, or or listen to CNBC through my Sirius subscription on my Roku, Amazon Echo, my phone or computer.

Additionally, most people can get broadcast stations through the air via an inexpensive small, flat antenna that is mounted on a window. I’m not interested, but I have a friend who just did that and gets ABC, CBS, NBS and PBS. For free.

Although our readers need internet for finding jobs, talking to doctors, and so their kids can do their homework, they also want to watch TV shows and movies. And they want to save money doing it.

I know I’m a tech guy, but cutting the cord is so simple that anyone can do it. It’s not technical at all.

I’d tell our readers, “Hey, you just saved money on your internet, now stop throwing away your money on expensive cable TV packages.”

Get all your local stations with a simple, inexpensive window antenna

This may come as a big surprise to many people, but you do not need an expensive cable TV plan to get all your local stations. A simple, inexpensive digital antenna sitting in your window will bring all the local hi-def channels in crystal clear.

Of course, you won’t get any of the cable-only stations like ESPN, CNN or MTV, but that’s a small sacrifice to make to get absolutely FREE TV service. If you live near any large or medium-size city, you will get all the local TV stations — including ABC, CBS, NBC, Fox, and perhaps even PBS — for free.

Which stations will you receive for free?

Obviously, the stations you receive will vary depending on where you live. But it’s very easy to find out which ones you’ll get in your area.

The Federal Communications Commission offers a service on its website that will tell you which local broadcast TV stations can be picked up in your area with a digital antenna. All you need to do is type in your address, city or even zip code and click “return.” You’ll get a list of stations broken down by signal strength — that is, which ones will have a strong, moderate, or weak signals and even no signal at all.

For example, our tech guru lives about 30 miles outside of Dallas, Texas. We plugged in his zip code and here’s what we learned:

That’s a pretty darn good selection of stations. It means that if he installs a small, inexpensive, digital TV antenna, he can view just about anything he wants that originates on broadcast television. Absolutely free.

Of course, you’ll get better reception and get stronger, better signals on those moderate and weak stations if you install a bigger, better antenna.

ONE QUICK TIP: Before you rush out to buy one of the new digital antennas, step outside and take a look up on the roof. If one of those old-fashioned antennas happens to be sitting up there, it may be everything you need. You may be able to run an inexpensive cable from the back of your TV to the antenna and voila! You may be ready to receive local TV signals without investing in a new, high tech digital antenna.

Here’s some very good advice from HowToGeek.com from a little earlier this year:

Different antennas are available depending on the distance you are from your local TV antennas. The most popular antenna on Amazon is an antenna with a 35-mile range, currently selling for $28 … It’s definitely worth picking up a more powerful 50-mile and 60-mile antennas, however, as the amplification helps with nearby signals too. The worse your signal strength, the more powerful an antenna you’ll need…

If you don’t mind your antenna looking old-fashioned and have a strong signal in your area, (a) cheap set of rabbit ears may be just fine for you, too. Of course, these aren’t the only options. You’ll find many other antennas on Amazon and elsewhere.

You’ll also need a modern TV that supports digital TV signals. At this point, all new TVs have offered this for many years. If you have an extremely ancient TV, it may not. You could purchase a digital-to-analog converter box, although it may just be time to upgrade to a modern TV instead.

Find them at Amazon, BestBuy, Target, Kmart, eBay, RadioShack (if you can still find one in your area), or almost any other online or brick-and-mortar electronics or TV store.

We do not claim to be experts on the subject of local broadcast television nor antennas. So we searched out some experts and got their opinions.

The good folks at cnet.com recently reviewed a wide array of digital antennas. There are dozens and dozens of these devices available, so we show you the following antennas not as recommendations, but merely as examples to demonstrate the range of what’s available out there.

The most expensive recommendation:

One of these things is not like the others. With its ankh-like looks and reversible design it’s definitely unique. It also comes with sticky tabs to attach it to your window, which is very handy.

Of all of the models here the base version offered the most channels and some of the strongest reception. This is our pick of the bunch, and if you need the extra oomph you can spring for the amplifier as well.

As you can see from the results adding the amp helped in our Long Island location but cut the number of channels in Manhattan by a third. As well as pulling in more channels it also improved the strength of the channels it received in the suburbs. It made the local NBC watchable, for example. 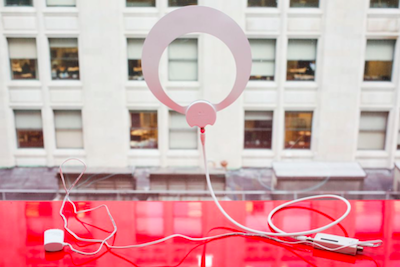 If you think of “indoor antenna” you invariably think of “bunny ears,” and that’s exactly what the pragmatically named RCA Indoor HDTV Antenna gives you. As it’s a tabletop design we couldn’t put the RCA on a window, and sat it in a window sill instead. It did well in the city but poorly in our mixed-reception suburban location. It’s worth paying a couple of dollars extra for the Flatenna. 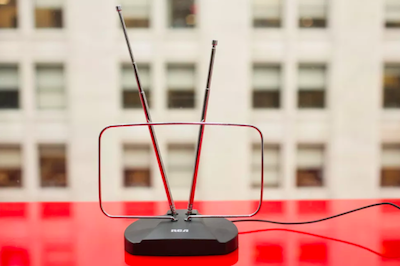 To repeat, there are dozens and dozens of different digital antennas with different capabilities and different prices. It’s absolutely impossible for us to know which one will fit your individual needs best, so it’s up to you to do a bit of research before you buy.

But no matter which antenna you decide to purchase, it will bring you something you thought was no longer available — free TV.

To paraphrase 60s LSD guru Dr. Timothy Leary, “Turn on, tune in, drop out of your expensive cable plan and watch free TV.”

<< 4GCommunity shuts its door, leaves its “community” of customers out in the cold
Sprint giving internet and computers to one million students. Here’s how to participate. >>