The Lifeline program has handed out free government cell phones to an estimated 15- 20 million needy Americans in the last five years. Unfortunately, they’ve been cheap phones with no internet capability, and being able to connect to the web is a practical necessity today. But this is about to change in a big way.

In the noble quest to bridge the digital divide and get all Americans online, the Federal Communications Commissions (FCC) will be soon expanding the Lifeline program to provide internet-enabled smartphones that come with a mobile internet plan. According to the experts at CheapInternet.com, they could become available as soon as 2014. What is now called the Lifeline phone program will become the Lifeline Internet phone program.

The same people who qualify for free cell phones will qualify for the internet-enabled smartphones.

The same people who qualify for free cell phones will qualify for the internet-enabled smartphones. This includes households who earn less than between 135-150% of the U.S. poverty level and families participating in at least one government aid program such as Food Stamps (SNAP), Medicaid, SSI, housing assistance and others.

The FCC’s roadmap to free mobile Internet is very clear if you simply follow their own words and actions. They formally announced their intent early last year, and at this very moment some of the leading providers of Lifeline free cell phones are in a pilot program giving out smartphones and internet plans to a lucky few in test programs across the country.

From Free Phones to Free Internet

The Lifeline free cell phone program has grown from serving the one state (Tennessee) in 2008 to serving 44 states, the District of Columbia, and Puerto Rico today. Unfortunately, as with many ambitious government programs, waste and fraud plagued the program and calls were made for reforms. In January of 2012, the FCC enacted the Lifeline Reform Order which would crack down on abuses and save an estimated $2 billion over three years.

The FCC decided to use these projected savings to transition the Lifeline program to solving a more critical communications need — providing Internet to low-income Americans. Here’s the relevant statement from page 4 the order:

“Consistent with previous efforts, we act here to eliminate waste and inefficiency, increase accountability, and transition the Fund from supporting standalone telephone service to broadband.”

They clearly stated their mission to transform the Lifeline program to deliver broadband internet. The following on page 5 told us what was next:

“Using savings from the reforms, the Order establishes a Broadband Adoption Pilot Program to test and determine how Lifeline can best be used to increase broadband adoption among Lifeline-eligible consumers.”

So the projected $2 billion in savings from reducing inefficiency and fraud will be spent to expand the Lifeline program so that it provides internet to the same people who qualify for Lifeline phones today.

There is no word on cost, but in our expert opinion, as with the cell phone program’s model, there will be free internet with low-cost upgrades for higher speed and usage allowance. Worse case, we think they could charge $10 a month for service, but they’ll give you the phone for free.

It Begins with the Lifeline Broadband Pilot Program 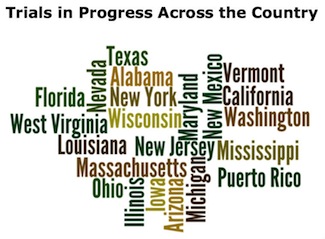 How does the FCC get from here to there — from dumb cell phones to internet phones? As with all government projects, it begins with a study. And that’s where we are now.

The FCC and Lifeline are nearing the end of a $13.8 million, nine-month pilot project called the Lifeline Broadband Pilot Program, ending on November 1, 2013. The program is testing the best way to give free or heavily discounted internet to low-income Americans. You’ll find more detail on the specifics on our Lifeline Internet page.

(This is separate from the FCC-enabled, non-governmental programs Internet Essentials from Comcast and Internet Basics from CenturyLink, which provide $9.95 cable and DSL Internet to eligible low-income Americans.)

The pilot program is testing 14 projects in 21 states and Puerto Rico. The participating companies are testing both wireline and wireless internet plans. In the wireline area, only one project is testing cable internet and the others are testing DSL. That makes sense, considering the Universal Service Administration Company (USAC), the organization which handles the Lifeline program, has a decades-old history of working with landline telephone companies, not cable companies.

And the Winner is (will be): the Free Government Internet Phone

After analyzing the details of the pilot program, here’s what we think is the really big news: Mobile Internet plans are being tested in twelve states by two of the biggest names in the Lifeline free phone program — Tracfone (Safelink Wireless) and Nexus (ReachOut Wireless). This is very telling because the most efficient way to bring internet to Lifeline-qualified Americans is to have the very same companies that are already giving out free cell phones replace those phones with internet-enabled smartphones.

We see government-subsidized internet via the Lifeline program primarily being given to people through smartphones such as Android phones, with mobile internet service included.

Lifeline already has a relationship with free phone providers such as pilot program participants Safelink Wireless and Reachout Wireless. The mechanisms for billing and reimbursements are already in place. And those companies already have a relationship with qualified customers clamoring for internet — the very people the FCC wants to get online.

Granted, this is also the case with landline Lifeline phone customers and their telephone companies. Lifeline will likely add some sort of Lifeline DSL plan that landline telephone companies can offer. But as with landline Lifeline telephones now, the service won’t be free, but will be steeply discounted. In our view, this cost structure is justified, because getting DSL and the required router installed and up and running is more costly and complex than is getting a smartphone in the mail and turning it on.

We see government-subsidized internet via the Lifeline program primarily being given to people through smartphones such as Android phones, with mobile internet service included. It’s a natural and cost-effective extension of the existing program.

There is no way to know exactly what the final details of the Lifeline Internet phone plans will be, but we believe we will see a free mobile internet plan which would include a smartphone such as an Android, with unlimited talk and text, and a 1-2 GB data usage limit. Higher usage plans would be available at a low cost of between $10 – 20.

When and From Whom?

The same companies provide free cell phones to millions of Americans will continue to dominate as the suppliers of these new smartphones. You’ll get your mobile internet phone from companies like Tracfone, Nexus and Virgin. It remains to be seen if they keep their current free cell phone company names of, respectively, Safelink Wireless, Reachout Wireless and Assurance Wireless. They may wish to rebrand their internet service with new names given the negative press and customer service reviews those companies have received.

We’re confident that 2014 will be the year in which Lifeline Internet become available to the large number of needy, unconnected Americans who simply require what has become a necessity in the modern world.

Keep tuned to CheapInternet.com for more details as they come out.