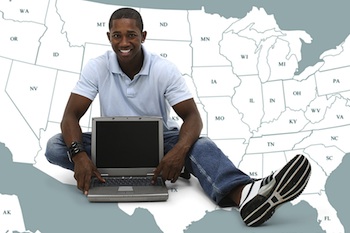 Connect to Compete's ad campaign beginning in January, 2013 will alert tens of millions of needy Americans that they can receive cheap internet and a cheap computer.

A state of limbo. That’s kind of where the Connect to Compete (C2C) program has been for since it was announced last fall. While participating companies both large and small were getting their proverbial ducks in a row, preparing for the official launch of the program, consumers have found themselves wondering how to sign up for the affordable internet service rates the program promised to deliver.

A brief side note: If you’ve tried to sign up for the program and have been turned away by any of the announced participating internet providers, you’re not alone. We recently called one of the major national participants to ask about the program, but the company’s representative hemmed and hawed and finally said, “We’re not allowed to talk about it yet.” If CheapInternet.com, the nation’s leading source of information on Connect to Compete has trouble ferreting out information on the program, we can only imagine how difficult it must be for ordinary consumers to research the subject.

But now the floodgates are about to open as Connect to Compete launches an advertising campaign touting its remarkable $9.95 per month internet service. A recent press release announced that the informational campaign will launch in January 2013. It’s been designed to promote the importance of digital literacy in today’s world, and to motive single adults and families to access a wide array of free resources and training.

In case you’re not yet familiar with Connect to Compete, here’s the scoop: It’s a private, nonprofit corporation that has been tasked with harnessing the power of the Internet to improve the lives of America’s poor and to enhance their ability to thrive in today’s interconnected world.

The people behind Connect to Compete’s cheap internet access program say that digital literacy will make it easier for low income Americans to compete for jobs and to access health care, education and government assistance.

Here’s a shocking statistic: However, more than 20% of American adults say they do not use the Internet. To put it another way, that means 60 million American adults are digitally illiterate.
“Neither the public sector, private sector, nor the nonprofit sector alone can tackle the broadband adoption gap and unleash the benefits of high-speed Internet for the 66 million Americans who don’t have the basic digital literacy skills to find a job online or access educational content. That’s just not acceptable in this day and age, where connectivity is essential,” Federal Communications Commission Chairman Julius Genachowski said. “Partnerships across sectors are an important part of the solution. This campaign will help connect millions more Americans to broadband, and empower them to reap the benefits of the 21st century digital economy.”

Connect to Compete will offer $9.95 broadband internet access, computer training and $150 refurbished computers. The only qualification: A student in the household must participate in the free school lunch program.