Comcast’s Internet Essentials delivers discounted cable internet to families with children who need to get online at home in order to do their schoolwork. A family qualifies by having at least one child who qualifies for participation in the National School Lunch Program.

Some activists pan the program, saying the connection is too slow. Others praise the program because millions of families cannot otherwise afford internet access for their kids. We are firmly in the latter camp. While we agree the speeds are on the lower end of the scale, they are still quite fast for only $9.95 a month. And they are without a doubt fast enough for any schoolwork, and even for a movie after Johnny finishes his homework.

Download speed is 5Mbps, with upload speed clocking in at 1.5 Mbps. When Comcast began the program in 2011, the download speed was just 1Mbps. In the fall of 2012, they increased it to 3Mbps download. In September of 2013 Comcast raised it to the current 5Mbps.

The Federal Communications Commission used to consider 5Mbps as a “broadband” speed until 2015. Since then, the FCC has upped the minimum requirements for the broadband designation from the 4Mbps/1Mbps threshold to 25Mbps/3Mbps.

Just what can you do with a 5Mbps connection? Remembering that Internet Essentials exists to help children in families without internet get online so they can keep up with other students, there is no question that the speed is sufficient for any student (and their parents and siblings).

In fact, even the FCC’s own Broadband Speed Guide, shown here, indicates that a child with Internet Essentials will face no limitations. 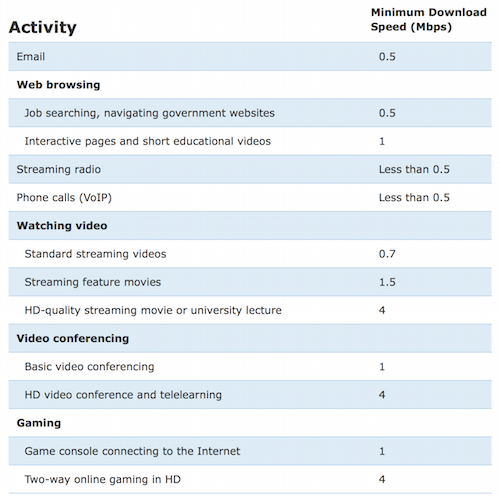 Might there be some buffering if someone is trying to watch a High Definition movie on a Saturday night when the internet networks are overwhelmed? Sure, that could happen. But watching HD movies on Netflix is not a part of Internet Essentials’ mission.

What about the upload speed? Isn’t 1.5Mpbs low? No, it’s not too slow because with the way most people use the internet, it’s only the download speed that really matters. Watching movies, surfing web pages, listening to music…that’s all being “downloaded” to your computer or device. Upload speed becomes important is when a person shares or uploads a large file, such as a big image or video. Or, if there is a teleconference in high-definition. And, there could possibly be some congestions in a multi-player over-the-internet game.

But let’s remember the objective of Internet Essentials. It’s to help those kids on the wrong side of the Digital Divide to do their schoolwork at home after school, rather than sending them to computer lab or the public library. That’s if these other options are even available.

We say thank you to Comcast for not only introducing this program, but for increasing the speed now twice already.