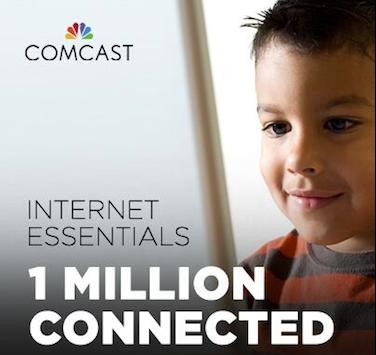 The entire purpose of Comcast’s Internet Essentials and CenturyLink’s Internet Basics programs is to reduce the digital divide between America’s rich and poor. Comcast just announced that it has now connected one million low-income Americans via Internet Essentials, so it looks like the effort is working.

Of the two programs noted above, Internet Essentials has so far had the most success in eliminating the digital divide. In a nutshell, it offers home broadband service for just $9.95 plus tax per month. It also offers customers a chance to buy internet-ready computers for as little as $150, plus the opportunity to access free digital literacy training.

“About 30 percent of Americans don’t have broadband Internet service at home. As the nation’s largest Internet service provider, Comcast has focused its efforts on getting these Americans online. Thanks to the help of thousands of community partners, in just over two years, we have connected an estimated 1 million low-income individuals, or more than 250,000 families, to the Internet at home,” Cohen stated. “To put that in perspective, that’s more than the entire population of a city like San Francisco or a state like Delaware or Montana.”

Despite the impressive numbers achieved so far, Cohen insists that Comcast is not sitting on its laurels. “However, we still have a long way to go,” he said. “We are committed to working to expand and improve the program and to engaging with our nonprofit and government partners to help bridge this so-called digital divide.”

Comcast has partnered with a wide array of companies and public service organizations to bring the Internet Essentials program to America’s needy. The Boys & Girls Clubs of America, for example.

“Now, it’s more important than ever to ensure that all young people have access to technology and broadband services during non-school hours to ensure they develop the skills necessary to be successful in school and their careers,” Jim Clark, President and CEO of Boys & Girls Clubs of America insisted. “We work with kids every day and see the difference that providing critical services, such as access to the Internet and technology training, can make in the future success of a young person. We also see the negative impact when that access is not available,”

The importance of home internet access is indisputable. This is made starkly clear by the results of an Internet Essentials’ survey of its current customers. It found that:

98% of the adults say their kids use the internet for homework. 94% believe internet access has had a positive impact on their children’s grades.

But the children aren’t the only ones who benefit from home internet access. 66% of adults use the internet for health care and government services, and 59% feel that the Internet helped someone in their home find a job.

It’s really relatively simple to qualify for the Internet Essentials program: Low-income Americans can participate if at least one child in the household is eligible to participate in the National School Lunch Program (NSLP). Qualified families can benefit from Internet Essentials as long as one child eligible to participate in the NSLP lives in the home. A couple other important caveats: They must live in a Comcast internet service area. They must not have been a Comcast internet customer within the last 90 days. And they cannot have an overdue Comcast bill or unreturned equipment.

Access to home internet can clearly help parents and children narrow the digital divide between rich and poor by improving health care options, educational resources and job opportunities. With that in mind, we believe Internet Essentials is a perfect example of how public-private partnerships can bridge that digital divide and lead America to a more successful future.

<< Keep your fingers crossed: Free internet coming for all Los Angeles residents?
       What is Super Wi-Fi and when can you get it? >>